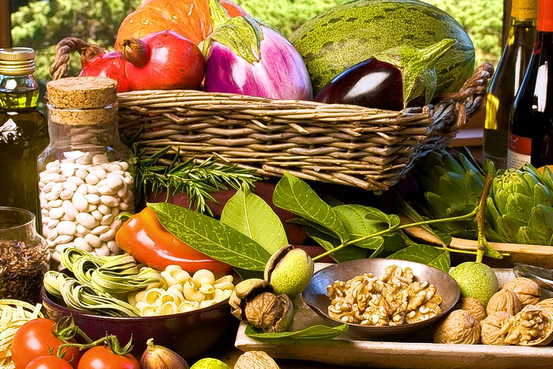 Greek researchers offered fresh evidence of the health benefits of the Mediterranean diet, reporting in a large study that it helps improve several risk factors linked to diabetes, obesity and heart disease.

The Mediterranean diet is high in monounsaturated fats such as olive oil and also relies heavily on whole-grain cereals, fruits and vegetables, fish and low consumption of animal fats. It has been shown in numerous studies and clinical trials to reduce mortality from such causes as cardiovascular disease and cancer.
Experts believe the antioxidant and anti-inflammatory benefits of the foods associated with the diet confer health benefits across a variety of diseases.
In a new analysis that pooled findings from 50 different studies involving a total of more than 500,000 patients, researchers led by Demosthenes B. Panagiotakos of Harakopio University, Athens, found the diet had beneficial effects against five components of a prediabetic condition called the metabolic syndrome. The analysis found that adherence to a Mediterranean diet was associated with a 31% reduction in risk of developing the syndrome.
The constellation of components of metabolic syndrome include waist circumference over 40 inches in men and 35 inches in women, abnormally high blood pressure and blood sugar, very low levels of HDL or good cholesterol and high levels of blood fats called triglycerides. Abnormalities in these risk factors are widespread among the growing numbers of people who are obese or overweight or have diabetes.
Heart experts and public-health officials believe effective approaches to helping people shrink their waistlines and achieve normal blood pressure, blood sugar and cholesterol levels would help reduce the devastating toll of diabetes and cardiovascular disease.
The new study, published online Monday by the Journal of the American College of Cardiology, is consistent with other findings of the protective benefit of the Mediterranean diet.
Elizabeth Jackson, a cardiologist at University of Michigan at Ann Arbor, said the study suggests that "when people are able to make improvements through diet, they are preventing the need in the future to go on medication" to control blood pressure and other risk factors. If doctors make more effort "to counsel patients on what a general healthy-eating diet is like, we can get a lot of bang for the buck," she added.
There were some limitations to the findings. For one, the benefit against the metabolic syndrome was found mostly in studies conducted in Mediterranean countries, and not in countries outside of that region.
Dr. Jackson said different designs of the underlying studies and the duration of follow-up could have influenced the results. She said, for instance, that U.S. studies, including the big Nurses Health Study at Harvard Medical School, have demonstrated the benefits of the diet in a U.S. population.
The results also reflect changes in recent years in how cardiologists look at the effect of diet on heart risk. For years, heart experts were focused on low-fat diets, but "we've really shifted our focus to thinking about other components," Dr. Jackson said. Research into the Mediterranean diet reflects how dietary fiber can affect measures like triglycerides.
Source: http://online.wsj.com/article/SB10001424052748703883504576186970964603198.html?mod=wsj_share_facebook
Posted by Unknown at 11:30 AM